Calidris alba
Charadriiformes
This is a large and highly varied group of birds that do not have many outward similarities. Most are water birds that feed on invertebrates or small aquatic creatures. The order is well represented in Washington, with seven families:
Scolopacidae
This large and diverse family of shorebirds is made up mostly of northern breeders that migrate long distances. Their highly migratory nature leads them astray fairly frequently, and rarities often show up outside their normal range. Many of these mostly coastal birds forage in relation to the tides, rather than the time of day. They use a variety of foraging techniques, but the most common techniques are picking food from the ground or water, or probing into wet sand or mud. Those that probe generally have sensitive bills that open at the tips. Most members of this group eat small invertebrates. Many make dramatic, aerial display-flights during courtship. Nesting practices vary, but both parents typically help raise the young. Clutch size is usually four, and both parents generally incubate. The young are precocial and leave the nest within a day of the hatching of the last chick. Most feed themselves, although the parents generally tend the young for a varying period of time. The female typically abandons the group first, leaving the male to care for the young until they are independent.
Common migrant and winter coast. Rare migrant east.
Source of Bird Audio

The Sanderling is a small, light-colored sandpiper with a straight, black bill and black legs. The male and female look similar. In breeding plumage, it has a rufous head and neck and a rufous wash that extends onto its back. In non-breeding plumage, the adult is white underneath and very pale gray above while the juveniles are white underneath with a dark and light mottled top. Late-molters, Sanderlings don't reach their breeding plumage until late May. This is the only sandpiper that lacks a hind toe, which allows it to be a strong runner.

Sanderlings breed farther north than any of the shorebirds found in Washington, nesting in dry, rocky tundra on the land closest to the North Pole. In winter and during migration, they inhabit broad, coastal beaches with light-colored sand. They can also be found on gravelly and rocky beaches and mudflats, and on top of kelp beds. In the fall, adults dominate the optimal habitats, and juveniles take the remaining spots.

Sanderlings flock, and members of different flocks interchange freely. The quintessential surf-dodger, the Sanderling is most recognized for its behavior of running down to the water's edge with an outgoing wave, and racing back up the beach to avoid the next incoming wave. Dunlins and Western Sandpipers also do this, so this behavior is not diagnostic. They feed by probing, and leave bands of holes along a beach where they have stuck their beaks into the sand probing for food. They also feed in tire tracks. When roosting, they usually stand on one leg, and if disturbed, they will hop away from the disturbance on one leg.

Sanderlings dine on a variety of aquatic invertebrates and sometimes carrion. One study identified young razor clams as a major source of food on the Washington coast.

Sanderlings nest on the dry, northern tundra, often close to lakes or ponds. The nest is on the ground, often on an elevated spot out in the open. The nest is a shallow scrape lined with leaves. The female generally lays two clutches, and either two males, or one male and the female herself, each incubate a clutch of four eggs. If the female has two males incubating the eggs, she will depart. If she is incubating a clutch, she will stay with the young, which hatch after 24 to 31 days, until they fledge at about 17 days. Males also stay with the young, which leave the nest and can feed themselves immediately after hatching.

This is the only shorebird species in which an individual has been recorded on both coasts of North America during migration, indicating that the migration path of the Sanderling is a wide oval. Migrating birds make long, non-stop flights between traditional stopover points. They have one of the largest latitudinal winter ranges of any shorebird. Adults leave the breeding grounds in July through mid-August, with juveniles following one month later. Sanderlings of Greenland and Siberia winter throughout coastal Africa and across the southern coast of Eurasia. The Canadian population winters along both coasts of South America as far south as Tierra del Fuego.

The Canadian Wildlife Service estimates the worldwide population of Sanderlings at 643,000 birds, with 300,000 breeding in North America and the remainder across Eurasia. Although the Sanderling is one of our most common sandpipers and has a worldwide distribution, it has experienced serious declines, as much as 80% of the population since the early 1970s. Sanderlings rely heavily on a small number of staging areas during migration, and destruction of these areas can seriously affect the population. Declines are probably due to disturbance on feeding areas during migration. The populations on the Pacific Coast fluctuate, but Christmas Bird Count data suggest that the wintering population in the Northwest has actually increased in recent years.

Sanderlings are common migrants and wintering birds along Washington's outer coastline. In fact, the highest densities of Sanderlings on the Pacific Coast are around the mouth of the Columbia River in southwest Washington and northwest Oregon. Birds start returning to Washington in early July, but are uncommon until mid-July. After that, they are common until the following June. The pattern is confounded by the fact that some first-year birds summer on the wintering grounds, so small numbers of Sanderlings are present on the coast year round. Summering birds are often found at Leadbetter Point. In the protected waters of Puget Sound, Sanderlings are uncommon but present, year round, sometimes as far south as Olympia. In the winter these birds are likely to be juveniles, as adults more commonly winter on the outer coast. In eastern Washington, Sanderlings are a rare but regular migrant. They are more common there during fall migration than spring. 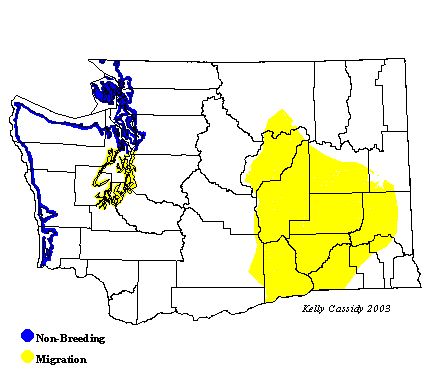